I Can’t Stick to a Diet and I’m Glad!

Diets don’t work and they can screw up your metabolism. Many people end up worse after dieting then they did before. I can’t stick to a diet and I’m glad.

I have been frustrated by my inability to stick with a diet since I was a teenager. I love to eat and I just can’t do deprivation, measuring food, or sticking to a set number of calories. For a long time, it seemed like a personal failing. Now I know it’s something that has saved me from years of fluctuating weight and taught me sustainable ways of maintaining a healthy weight while eating real food in authentic portions.

I remember the first time I felt fat. I was in ninth grade gym class and it was our annual weigh-in and height measuring. I had been 5’6” since I got to junior high but I started as a size 5. That year, I weighed a whopping 125 pounds and was a size 9. I felt huge.

Little did I know that I would never be that small again. If only I had known how perfect I was then and what a great size that was for someone of my height. But I didn’t know that. All I knew was that it seemed (It wasn’t actually true) that the popular girls were tiny and cute. I wished more than anything that I could be smaller. However…

I couldn’t diet. I liked to eat. My mom was a good cook and I loved her dinners. I liked my school lunches. I liked candy and junk. My weight stayed fairly steady through my high school years and the first year of college. Through adulthood I would fluctuate between size 10, 12, and 14 as I navigated pregnancy, motherhood, school, and work.

I was “successful” twice.

During the 20 years before I gave up on the idea of dieting for good, I did stick to two diets. The first time I was successful was a very restrictive low calorie, low fat diet.  It was so restrictive and what little amount of food that was allowed was eaten in strict timing. I did get very thin. But I looked and felt frail and that way of eating was not sustainable. I gained all my weight back plus more.

Ten years later, I tried Weight Watchers. I lost weight at a moderate speed. The lower the numbers on the scale went, the lower my points went. At my final 19 points, it seemed I could hardly eat any real food and I remember days so miserable because I was out of points. Once I reached my lowest weight, I quit. I couldn’t do it any more. I gained the weight back plus more again.

At that point, ten years ago, I decided that I wasn’t going to diet again. I did however, commit to eating healthy and exercising. I still wanted to be healthy but I gave up on the idea of being thin.

I truly believe that not dieting, as in not restricting calories over the years has allowed me to preserve a decent metabolism. I’m sure my two dieting escapades did not help, but overall a commitment to natural foods and exercise rather than trying to be thin, has benefited my body.

I do not believe that skinny equals healthy. The human body has a variety of sizes and shapes that can be ultimately healthy. Far more important in my opinion is what we are actually eating and how we feel about our food.

I don’t know how it feels to be obese. I did get lucky, in that while I’ve never been called thin, I have not been called fat either. I know what a struggle it’s been to maintain my weight and how it’s been impossible at times to lose weight. I understand the lure of diets and diet foods in a quest to be thinner.

But I also know that eating low-fat processed foods and diet sodas is never going to get someone healthy or affect sustainable weight loss. Those kinds of food actually hinder weight loss.

I don’t diet. The number one reason is that I hate them and I hate portion and calorie restrictions. I don’t like being told what to eat and when. And I really hate processed foods and anything branded as low-fat. In addition to having an inner rebel that doesn’t like dieting, here are some other reasons, I don’t diet.

Most diets say there’s one perfect number of calories for every person every day.

I was invited to join what I thought was an online fitness group. It turned out to be a dieting group so I don’t have much in common with them but It’s been interesting to hear about their process. These ladies DO have discipline! The general idea is that everyone sticks to 1200 calories a day. The women in the group do this by eating a lot of low-fat but somewhat high-carb items. The thing that fascinates me is that most of the conversation is about snacks. Everybody is hungry—every day!

Most diets say ANY food is okay as long as you stay within your calories.

Our bodies, our weight, and our relationships with food are complicated. What works for me might not be what works for everyone else. However, there is information about food available online and in books. Read up on insulin resistance. Read up on inflammation. These are things you want to avoid. They don’t happen overnight but the kind of food you eat plays a big part in playing havoc with your health.

Not only do certain foods damage your body’s functions but they can increase cravings making it very difficult to eat in healthy portions. Not all food is benign! We know that a bag of candy is not good for us. But rarely do we think what our bodies are going through to process it and the long-term damaging effects from chronically eating  high glycemic, high carbohydrate foods. Even so-called healthy ones such as oatmeal or low fat yogurt are can affect your body negatively over time.

I don’t know how eating authentic food could be bad. For many years we were taught eggs were bad. We were taught butter was bad. Red meat is still vilified. I don’t believe any of these foods are bad by themselves or in combination with other real foods. A moderate piece of steak, a baked sweet potato with coconut oil, and a bunch of green veggies with olive oil would probably be quite a few calories or points. But it’s a great meal that will energize you and keep you satisfied for hours.

Most diets use portion control.

My way of handling junk and processed foods is to avoid them as close to 100% as possible. I wish I could say I just don’t like the taste. But heck, I have my foods that I could eat and keep eating until I am stuffed. I don’t have good self-control around junk food! But I’ve learned that’s not just a character flaw. It’s something that is inherent in junk and fast food by design. Modern processed foods are addictive and if we eat them, the desire to keep eating is stronger than the body’s signals that it is full.

However, it’s almost impossible to overeat real food. I’m not saying I don’t now and then. Sometimes it’s just so good! When you are eating real food, you do get the signals that you’re full. And I would much rather trust my body to eat what it needs than an amount set by somebody else. Some days I just need a little more. Other days I need less.

As I got ready to write this last paragraph I have been trying to think of one single person I know personally that has lost weight and kept it off. I haven’t been able to think of one person either from my personal or work life that successfully dieted and kept the weight off. Most people it seems stay around a certain point and gradually get a little bigger as the years go by. The few people I know that actually lost significant weight, have all gained it back.

I’m sure there are people out there who have. All I’m saying is that I don’t know any of them.

Just because diets don’t work doesn’t mean there’s no hope. I’m a believer in eating real food in real portions. I’m not perfect and my diet isn’t always perfect as much as I wish it was. I also have to exercise on a regular basis. I can’t eat everything I want—and I’m glad about that too. It’s forced me to learn to eat better and smarter.

I’m so glad that I can’t stick to a diet. I haven’t been very successful in dieting but it’s forced me to learn to eat better and smarter. It took many years after the first time I felt fat to learn to not fear food. For ten years now, not only do I not fear food, I truly appreciate and enjoy what I eat.

P.S.
Here are some posts about what I do instead of dieting

Was this post helpful? Please pin it so that others can find it too!

Keep showing up my friends,

I'm a certified life and weight loss coach who helps women feel better and get the most out of their lives! The process of life coaching teaches you to love yourself and gain self confidence in a safe effective way.

Ready to find out more? 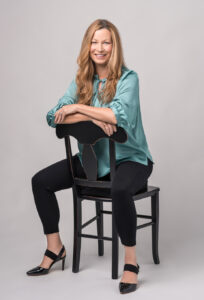 Hi, I'm Sara Garska and I'm so happy you're here! My Think Big Life began shortly after I turned 50. Big changes can happen with a small start, an adjustment of thought, or a simple process. Over time, you transform your life into the one you always dreamed of having. As a certified life and weight loss coach, I can help you create a life you love. Click here to schedule a free 50-minute coaching session.